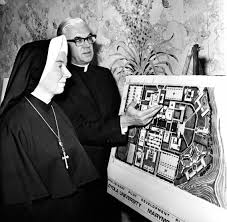 Loyola Marymount is a unique institution for myriad reasons. Whether it be its location in Los Angeles and Silicon Beach, its strong commitment to the education of its students, or its scenic location, LMU is by many standards an exceptional University. But what makes it the most unique perhaps is the relationship that the university has with its founding religious orders: The Society of Jesus, the Sisters of the Religious Sacred Heart of Mary, and the Sisters of Saint Joseph of Orange. LMU’s religious traditions make it an even more powerful force when compared to other local universities since they necessitate a shift in focus towards the community that flourishes here on “the bluff.” The university’s mission, which focuses on the encouragement of learning, the education of the whole person, and the service of faith and the promotion of justice, has its roots in the religious orders that provide the fundamental framework for the university’s identity. But what is often overlooked in the context of the school’s identity and history is the moment when the ‘M’ entered LMU. The merger between Loyola and Marymount, which began in 1969, was an interesting and complex process that not only made the University coeducational but enhanced the rich social and academic environment at LMU.

When looking at the University today, a great deal of its most celebrated aspects are owed to the work of the women, and in some cases the one woman who orchestrated and saw the merger through. Sister Raymunde McKay was not only one of the principal architects of the merger but was able to preserve much of the Marymount tradition in the process. While Marymount was often looked at as a force that would detract from the tradition and excellence associated with Loyola University, Marymount’s ethos as an innovative women’s college actually radically improved the academic and social experience on campus. Sister Raymunde’s efforts to preserve Marymount’s character as a first rate women’s college in a changing era where equal rights and feminism were center stage highlight the important agency of women and their contributions during the paradigm shift of the late 1960s.

One of the key aspects of the merger was the important role that Sister Raymunde played as the architect of the merger, representing the important role that women played as agents of change during the pivot to coeducation. In his history of the university, Kevin Starr argues that “Had Rev. Mother Mare du Sacre Coeur or a similarly traditionalist sister been president of Marymount in the mid 1960s, the affiliation with Loyola might still have happened. But it would not have happened with the rapidity that was the direct result of Sister Raymunde’s highly personal conviction that that Marymount had made a mistake in Moving to Palos Verdes.” Her experience as an economist with a degree from the London School of Economics made her in many ways the perfect candidate for president of Marymount during this difficult time. She not only pushed hard but pushed others hard in expediting the merger process in order to help the college survive the debts it took on with the move to the Palos Verde campus before her arrival. One of the things that she knew the college had to do was to draw more students, and the best way to do this was through an affiliation with Loyola. She brought her own people from New York to help work on the details of the merger and affiliation, including a new special assistant whose sole job was the merger. While she was negotiating with Father Cassasa, she also merged Marymount with the College of Saint Joseph of Orange, an institution that was undergoing similar problems as an all women’s college in a changing era where feminism and equal rights had heightened importance.

Sister Raymunde knew that Marymount’s resources and quality of education were more than enough to attract new students but would have to provide a better setting for them to be accessed in order to keep the College afloat. In her words, Marymount was a “very fine innovative experimental college.” The college had introduced a number of programs designed to expand its reach and influence, including the Encore program to help students who were returning to higher education after some time off, and even started accepting international students through the development of an international students program. Marymount had for some time been more selective than Loyola had been with the students that it was admitting. By the beginning of the merger process Marymount had established sound tradition for itself.

While there were certainly some complications with the merger processes, it was the students who, recognizing the value of coeducation, provided the foundation for moving beyond just affiliation. In an interview with Father Mike Engh in 1996, Sister Raymunde said that initially the arrival of the women on campus was not without some difficulty, recalling a conversation somewhat humorously where she said, “Joseph and Mary are doing just fine, but Jesus is giving them a little trouble.” Despite some of the initial problems however, the students quickly began to get along and even initiated their own merger process, first merging their student governments and newspapers into one body, during the period of affiliation. This was important because as the structural conditions provided more and more of an impetus for the merger, it was students who provided the framework upon which it could take place. Everything about the move to the Loyola campus had up until this point been billed as though the two institutions would be separate. There was an important desire from some alumni, students, and faculty to keep the college and university distinct, as the identities of the two schools seemed incompatible. But the merger was in many inevitable, as it was simply just too complicated to have two of everything: Presidents, Registrars, Departments, and even admissions.

As the merger process began, however, conversations about the future name of the college caused a great deal of tension. There was very little desire from the men of Loyola to have the women’s Marymount name as a part of the new institution’s title. After a great deal of haggling, Sister Raymunde finally told the soon-to-be Vice Provost Dr. Harangue: “No Marymount, No Merger.” This would prove to be the decisive moment when the inclusion of the ‘M’ in ‘LMU’ became a reality. This is particularly important because it highlights Sister Raymunde’s role as a negotiator and her willingness to play hardball with the men, highlighting her agency as a key figure in the schools pivot towards coeducation. Her desire to preserve the Marymount name is reflective of the desire to preserve the identity and ethos of women’s education and the important contributions of women, not just at LMU but across the country in general.

It was during this era when many other schools like Harvard, Yale, and Princeton were going co-ed as well. Loyola Marymount’s merger in the late 1960s and early 1970s is an excellent example of this shift. The historian Nancy Malkiel argues that the shift to coeducation during the late 1960s had very little to do with the agency of women but rather the waning reluctance of men during this era, who finally saw women as contributing to the academic environment for the male students. She argues that it was only structural changes that necessitated the shift towards coeducation. But what the Loyola and Marymount merger shows is that women did play a vital role in the era’s mergers and the shift toward coeducation. Additionally it highlights an example of a university where the identity of the women’s contributions was indelibly preserved in the school’s identity and history with the name change. The merger between Loyola Marymount also highlights the post Vatican II shift towards the acceptance of women and the growing role that they could play in the church and church life. Sister Raymunde and her fellow RSHMs were pivotal figures in both a feminist and religious context.

The work of Sister Raymunde McKay during the affiliation and merger process was critical to the expediency and success of the affair. But it was her place as an agent for radical change during the equal rights movements of the 1960’s that makes her unique. Despite the fact that Marymount was often seen as a handicap to the ‘prestigious’ Loyola University, there is also a great deal that would say otherwise. It was the strength of Marymount College that made LMU what it is today. As the University continues to reassess its identity to promote itself as a first-rate academic institution, acknowledging the historical roots of the institutions and the important role and context that women have played at the university will prove to be very important.