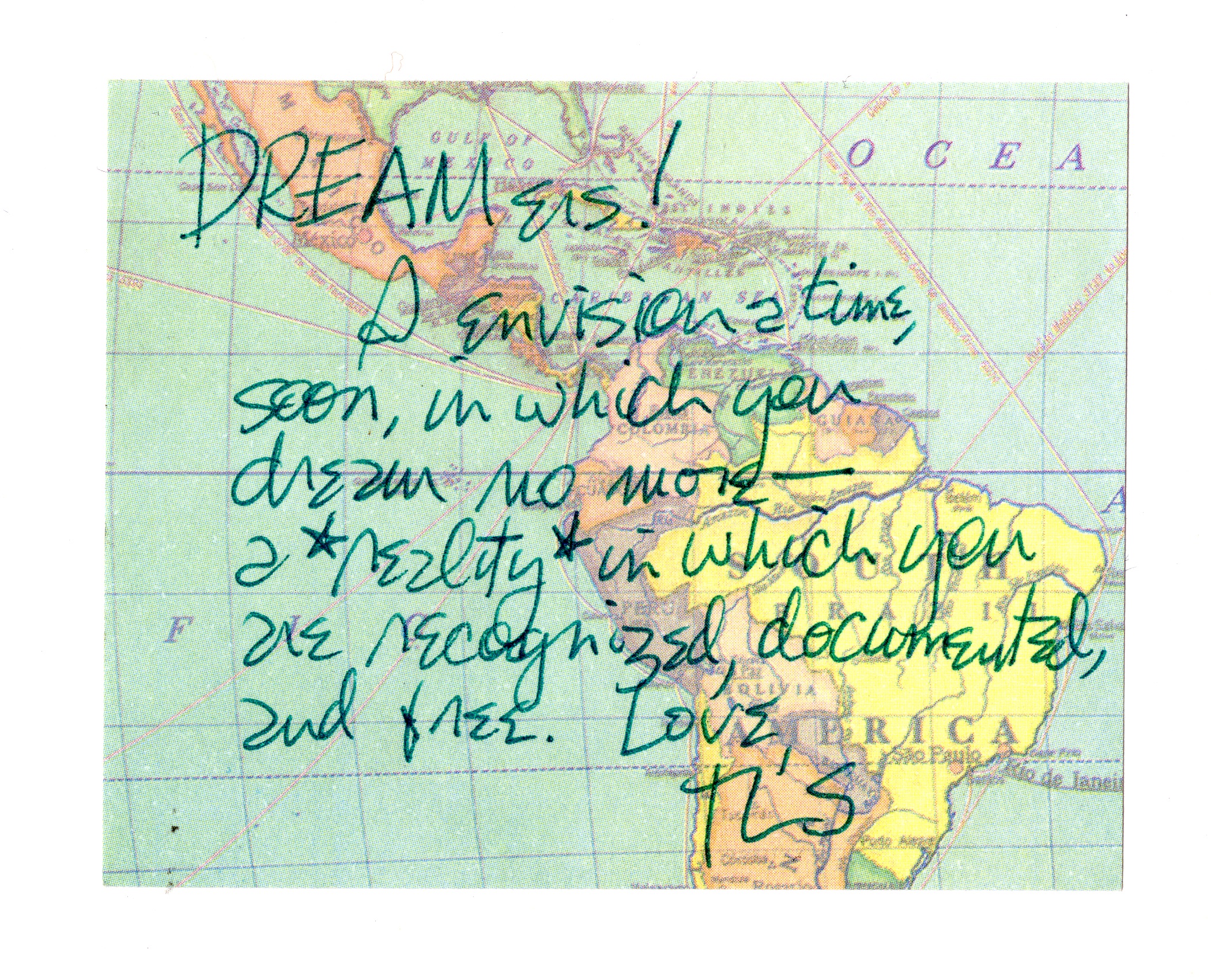 Jesuit universities claim to share a common goal in terms of their commitment to social justice, and their support for undocumented students and “DREAMers” is a fine example of that. In early October 2017, the Loyola Marymount University’s William H. Hannon library staff put up a whiteboard where students, faculty, and anyone passing by could write post-it notes to respond to President Donald Trump’s plans to rescind DACA (Deferred Action for Childhood Arrivals). The response was overwhelmingly positive, and even University President Snyder made an effort to show his support. Jesuit Universities, and Loyola Marymount specifically, have done an admirable job responding to President Donald Trump’s plans to rescind DACA, but a lack of accountability in terms of actually determining the legal status of potential students in the admission process can impair the amount of support that these Universities can provide to their “Dreamers.”  Loyola Marymount’s post-it notes is an encouraging start, but Jesuit Universities have a long way to go in terms of the sustenance and care afforded to their enrolled “Dreamers.”

The topic of immigration and the opportunities, or lack thereof, afforded to the children of undocumented immigrants in the United States has had a complicated legal and political history that has divided, and sometimes united, the country for decades. In a landmark decision in the Plyler v. Doe case of 1982, a narrowly divided Supreme Court found that undocumented children had a constitutional right to free K through 12 public education. Undocumented children poured into the nation’s schools over the next decade, and as they reached the college age, advocacy for access to higher education was inevitable. In 2001, these children and young adults began calling themselves “Dreamers”; the term refers to the estimated 2.1 million young immigrants who have grown up as Americans in essentially every way except for their passports. The name came from the Dream Act (Development, Relief, Education for Alien Minors), introduced in Congress in 2001, which gave undocumented children a realistic path to citizenship (Russakoff). While the Dream Act was never officially passed, the large network of “Dreamers” became an exciting and motivated force. On June 15, 2012, uncoincidentally the thirtieth anniversary of the Supreme Court’s Plyler decision, the Obama administration enacted DACA, which allowed teenagers and young adults who came to the United States without authorization as children with their parents, to register with the government and in turn receive a two-year renewable protection against deportation, along with work permits and Social Security numbers. (Russakoff) However, the 2016 election of Donald Trump as president changed everything, as he made it a point to effectively mobilize anti-immigration anger. Trump vowed not only to build a wall on the border to keep any more immigrants from entering, but he also proclaimed that he would deport all eleven million undocumented immigrants and terminate DACA, all in his first 100 days in office. Since his election, “Dreamers” have been living in a constant state of fear and anxiety, and universities with students affected by DACA have been forced to respond.

Since DACA was enacted, universities have certainly worked on endorsing support structures. Loyola University in Chicago, for example, has made some admirable progress, as the Department of Student Diversity and Multicultural Affairs (SDMA) created a training program for faculty and students with the goal of teaching more about the history, struggles, and needs of undocumented students, as well as bringing more awareness, building safe spaces, and providing allies with resources to support undocumented and “Dreamer” students on campus (Klaf and Kaufka Walts, 158). In the beginning of the 2013-2014 academic year, a university wide committee was created to assess the university’s current work regarding undocumented, DACA, and DACA-eligible students. The group, “University Collaborative for Undocumented Students” (UCUS), was comprised of fifteen faculty, staff, and student representatives, including an undocumented graduate student (Klaf and Kaufka Walts, 160-161). Furthermore, in the summer of 2014, the Student Government of Loyola Chicago (SGLC) partnered with the Latin American Student Organization (LASA) to create a scholarship fund for undocumented Loyola undergraduate students (Klaf and Kaufka Walts, 163). The hope is that these efforts have been inspiring to similar student and faculty collaborative movements on other campuses. To their credit, Jesuit schools are making strides to help undocumented students overcome barriers and access higher education, despite the persisting informality of their admissions process. Social justice is crucial to the common mission of all Jesuit Universities, and “Dreamers” simply need more of a voice (Klaf and Kaufka Walts, 165). Finally, on September 28, 2017, the student body presidents of the twenty-eight Jesuit colleges and university in the United States issued a joint DACA statement.

We, as a collective unit, acknowledge that this is a human issue that will impact over 800,000 members of our nation. Immigrants have played a crucial part in the foundation of this nation and have dreams and aspirations like any other person; these dreams should be preserved and kept sacred just as any other. (ASLMU)

The statement proclaimed to engage students in dialogue that denounces the removal of DACA and promotes action off campus to create a greater understanding of the need for DACA, among other actions.

Loyola Marymount University in Los Angeles has also made a commitment to inclusion. A few weeks before the “Dreamer” post-it note board, LMU celebrated Constitution Day by inviting Ahilan Arulanantham, director of advocacy and legal director for Southern California’s ACLU (American Civil Liberties Union) to speak on immigrants’ rights advocacy (Tara). Furthermore, in the winter 2017 issue of the LMU Magazine, there was a featured article written by freelance journalist Scott Timberg on the fate of DACA and how it would affect LMU students. Cecilia Gonzalaz-Andrieu, associate professor of theological studies, who works with many DACA scholarship students, was quoted in the article, “It’s complicated, costly and frightening. They had to turn in all the information about themselves, be fingerprinted…They’re the most extremely vetted group of people in the country right now” (Timberg). As the controversy was cresting in early September, shortly after students had returned to campus for the new academic year, University President Timothy Snyder, wrote to the university community in support of LMU’s DACA students, stating, “LMU stands unequivocally in support of all our students. We renew our resolve to protect our undocumented students to the fullest extent of the law” (Timberg). The office of Ethnic and Intercultural Services in the student affairs division also now provides a resource website including links to organizations offering scholarships and informational resources for undocumented students and their families (Klaf and Kaufka Walts, 169) .While the University’s formal processes and resources for “Dreamers” seem to be making some progress, it has been the ability of the students to band together that seems to have had to largest impact. The LMU library’s idea of a post-it note board was a tremendous idea, and it garnered participation from faculty, staff, students, and alumni alike. President Snyder even participated, contributing a note:

DREAMers! I envision a time, soon, in which you dream no more—a reality, in which you are recognized, documented, and free. Love, TLS.

There were also a number of notes in Spanish, displaying the large group of Latina/o students and faculty potentially affected by DACA, as well as overwhelmingly positive sentiments such as,

We will never stop fighting for you! You are the definition of the American Dream! The real America loves you! (DACA Post-It Notes)

With the unanimous consensus between students, faculty, staff, and alumni being one of prodigious support and compassion for “Dreamers” and anyone part of the LMU family that is directly affected by the rescinding of DACA, one can hope the library’s post-it note board will be a springboard for further action.

In conclusion, many Jesuit Universities have taken great strides towards acknowledging and providing support for “Dreamer” students since Trump came into office in 2016. Yet, the lack of official procedures in admission offices still prevents universities from truly getting a better sense of who their students are and how best to help them. While unlikely in the Trump era, Jesuit universities can hopefully reach a point where “Dreamers” are not forced to hide in the shadows. Yet until then, the anonymous nature of Loyola Marymount’s post-it board displays that people do care and envision a brighter future for “Dreamers.”

Klaf, Suzanna, and Katherine Kaufka Walts. “From Research to Action: Jesuit Institutional Practices in Response to Undocumented Students.” In Undocumented and in College: Students and Institutions in a Climate of National Hostility, edited by Jonas Terry-Ann and Nicholas Laura, 134-78. New York: Fordham University, 2017.