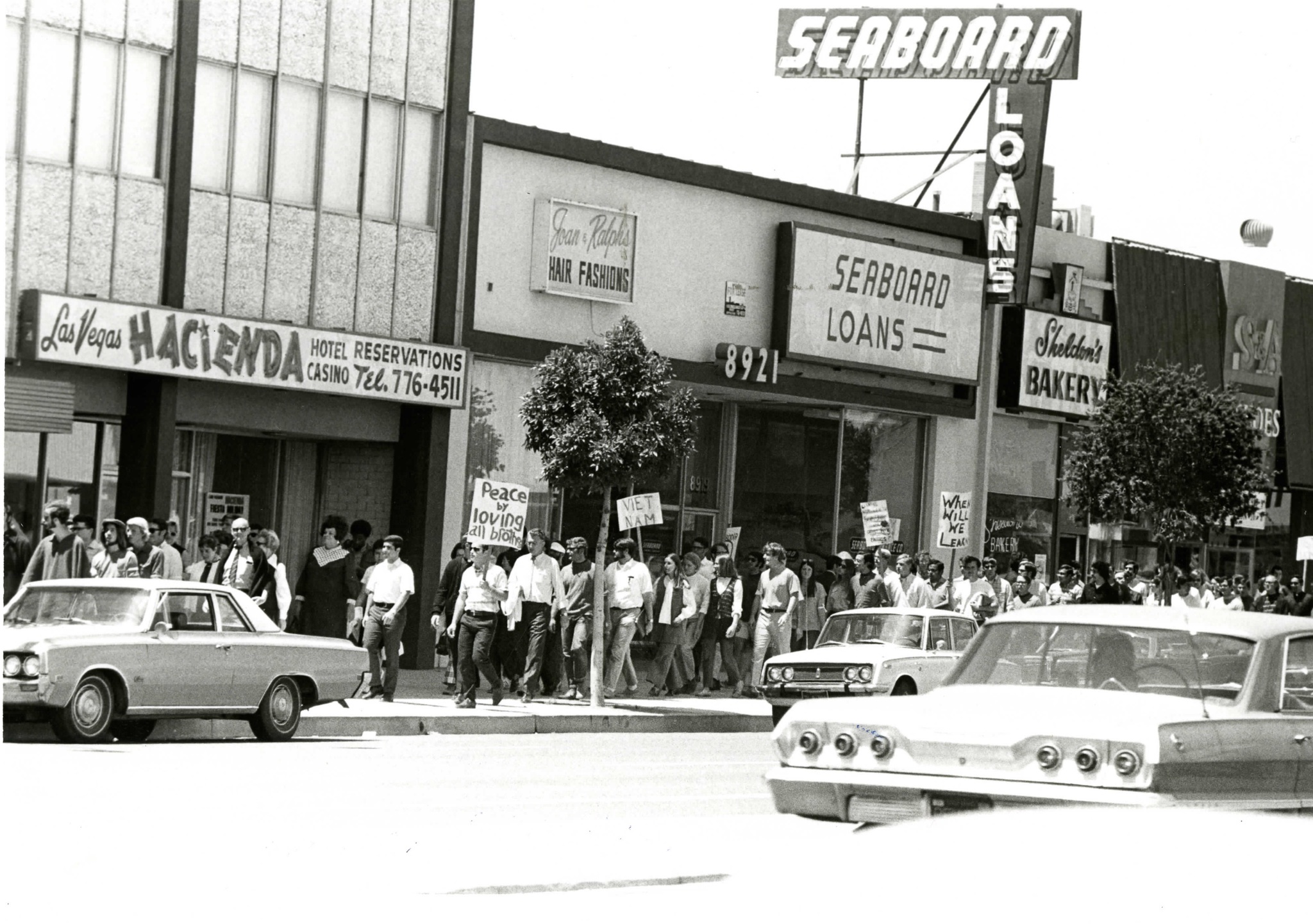 Some of the most iconic images of late 1960s and early 1970s America are those of Vietnam protestors. From 1964 to 1973, marches formed mostly by students and counter-cultural participants moved through city streets across the nation to display their opposition to the unpopular war the U.S. launched into Vietnam. On May 12, 1970, students from Loyola University and Marymount College took part in the trend. Approximately 300 students marched from the university through downtown Westchester, speaking out against the war and then-President Nixon’s handling of it. These nationwide protests were notable for shifting public opinion on the Vietnam conflict and eventually influencing the end of the war, and the Loyola student march is an example of how the university’s students made history with fellow colleges across the country

For nearly a century, countries in Indochina were under French colonial rule; this area consisted of parts of modern day China, Laos, Cambodia, and Vietnam. In 1940, Japan launched an invasion into the region, overthrowing the French regime. After the Japanese surrender in World War II in 1945, a communist movement led by Hồ Chí Minh declared Vietnam as independent, only to be reclaimed by France shortly after. This led to the First Indochina War, lasting from December 19, 1946 until the Geneva accords of 1954, when France officially and finally pulled out of Vietnam, marking the end of French Indochina.

The following periods of Vietnamese history saw tensions between the Northern half, controlled by the communist Viet Minh forces, and the South, led by the anti-communist Christian Ngô Đình Diệm. While American Presidents Dwight Eisenhower and John F. Kennedy both escalated the conflict politically, Lyndon Johnson was responsible for the initial American invasion. Following the Gulf of Tonkin incident, in which an American ship was attacked by North Vietnamese torpedo boats, the Johnson administration began to send bombs and ground troops into Southeast Asia between 1964 and 1965. An antiwar movement began in the United States almost immediately following the invasion, a movement that “began mostly on college campuses,” with these students being “a small but outspoken liberal minority” in a country where “the American population still supported the administration policy in Vietnam.” Outside of students, the movement was also comprised of “artists and intellectuals [as well as] members of the hippie movement, a growing number of young people who rejected authority and embraced the drug culture.”

The 1968 Tet Offensive proved that the war seemingly had no end in sight, and anti-Vietnam War protests grew significantly, reaching their height in 1970. On April 30 of that year, President Richard Nixon announced that the conflict would expand into Cambodia. Reactions to this move were mixed. In an issue of the Los Angeles Loyolan from May 15, students of Loyola University and Marymount College voiced their opinions with the President’s decision. Keith Brave “think[s] it’s Great!” and “[a]bout time.” Rudolph Paralja believes North Vietnam was being stubborn and that “there are no grounds to prevent Nixon from carrying the war to the communists.” On the flip side, Tom Glaudemans stated that he “felt what Nixon did was just a self-defense move and he had to do it or either get out now,” later stating he “think[s] we should withdraw but in good time.” One anonymous student says that they “disagree strongly with Nixon,” that they “don’t understand why we cannot leave…” while another anonymous one “believe[s] the war in Vietnam to be a grave mistake (no pun intended).”

The same week as Loyola’s peace march was the National Student Strike, in which thousands of students from across the United States partook in (mostly) peaceful protest marches, not only as a response to the expansion of the war into Cambodia but also in reaction to the Kent State massacre of May 4, 1970. At that college, in the days leading up to the shooting, the students organized a protest that grew violence, with students setting fire to the ROTC building on May 2. In response, the Ohio National Guard went in two days later and fired 67 rounds onto the unarmed protestors, killing four students and injuring ten more. This event, plus the violent protests resulting in a police shooting at Jackson State and a student bombing at the University of Wisconsin, completely shifted public opinion on the Vietnam War. As newspapers and television programs showed the images of slain students on the campus of Kent State, as well as those of killed soldiers in Southeast Asia, a vast majority of Americans began to oppose the war in a seemingly overnight backlash.

While protests on college campuses were not new by the time the Kent State massacre took place, following the tragedy, the number of them rose significantly. On May 8th, 1970, 100,000 protesters marched through Washington D.C. and another 150,000 in San Francisco. While there were a few instances of violence — some students taking after Kent State and igniting their ROTC buildings — most of these protests were peaceful, such as the one here at Loyola. In an article written for the Los Angeles Loyolan, student Bob Chmiel said that “Nixon’s action was an outrageous overstepping of his powers as President” and “went contrary to the desires of the people of the United States”; Chmiel felt that “[i]t is about time students started getting involved.” A few days after the National Student Strike, Loyola University and Marymount College students took to the streets of Westchester on May 12, 1970. Photos taken for the Los Angeles Loyolan captured the scene; a sign at a dorm window stating “STUDENTS OF LOYOLA UNIVERSITY RESIST WAR” with a massive peace sign underneath it. An info table set up during the protest, with a large cage for donated canned goods and a “RESIST THE DRAFT” sign attached to it. A wide image showing conservatively, almost uniformly dressed student protestors carrying signs stating “WHEN WILL WE LEARN,” “PEACE BY LOVING ALL BROTHERS,” “VIETNAM,” etc. marching through Downtown Westchester.

John Dreyfuss from the Los Angeles Times stated that “[a]pproximately 500 Loyola University and Marymount College students walked quietly through downtown Westchester, advocating peace” and “returned to a special Mass on campus.” In a separate article, he noted that other universities in Southern California, like USC, San Fernando Valley State, UCLA, Cal State Los Angeles, and Cal State Long Beach, also participated in protests that shut down the colleges for the day: USC students marched “peacefully from their campus to City Hall… carrying what they said were 50,000 letters to President Nixon opposing the Southeast Asia war”; Cal State Long Beach students were allowed to protest and were given “immediate ‘pass’ grades if their work thus far merits a C grade or better”; and “500 students from 51 California colleges… attended a National Student Congress at San Jose State.” The faculty of these colleges were also upset with the war. As at CSULB, the presidents of Loyola University and Marymount College allowed students the right to protest, “designat[ing] Monday [May 11] and today [May 12] as ‘peace days’.”

The Vietnam War Protests have been noted for their “sound and fury.” Former antiwar participant Bill Zimmerman, writing for the New York Times, recalled the “four stages” of the protests. The third stage, taking place from Nixon’s inauguration in 1969 to 1971 (the period when the Loyola University and Marymount College students marched), had a “much angrier edge” than the phases before it. As some troops returned home, many of them began to take part in the antiwar movement, with one notable event involving 800 G.I.’s “[throwing] their combat medals over a fence surrounding the Capitol.” Other cases, whether out of solidarity with Vietnam or to spite the U.S. government, involved protestors siding with “the enemy,” stating that “[o]ne side’s right, one side’s wrong, victory to the Viet Cong.” Zimmerman credits the final stage of protesting, one that saw the release of the Pentagon Papers and a brief attempt by Nixon to expand the war efforts shortly after, as being what eventually persuaded Congress to officially end the Vietnam War on August 15, 1973. America’s final ambassador in Saigon admitted that the protest movement was “one of the best propaganda and pressure organizations the world has ever seen,” and Zimmerman closes his piece by stating “[i]n the end, it was the war that was lost and the peace that was won.”

The Vietnam War protests shifted public opinion on the conflict and eventually helped end it entirely, and images of these activists’ efforts are a historically significant piece of 1960s and 1970s America. These younger Americans, comprised of students and hippies who were angered by the Kent State massacre and the combined decisions of Johnson and Nixon, altered the course of history is a substantial way. And while the protest Loyola University and Marymount College students held on May 12, 1970 was admittedly not flashy or violent or particularly unique, it was one of thousands of protests held across the nation that eventually helped end the controversial war.